What's in Store for the Fermented Food Market in China?

Why is fermentation garnering so much attention? 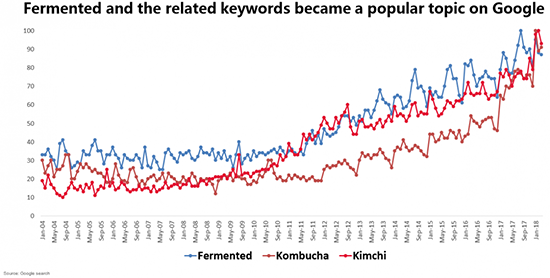 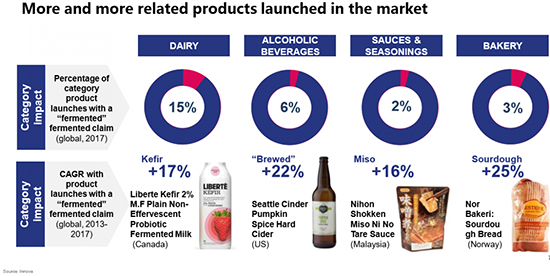 Fermentation can meet the upgraded demands of consumers by meeting the following important criteria: natural, aesthetically pleasing, tasty, and healthy. In an era when almost all people, especially the young generation are netizens, individuals are now proactively turning to the internet to find information on how to improve their health and wellness. Starting in 2004 to present day there has been steady upward growth in online interest and searches of the word fermentation.

Fermented products are increasingly popular in global markets and the variety of fermented products available now reflects this surge in interest. The top four fermented food categories are dairy, alcoholic beverages, sauces & seasonings and baked goods. Fermented dairy products, occupies a 15% share of the market and remains the most important sector. Although in historical terms fermentation of dairy has been a popular practice for a long time, new categories of fermented dairy keep emerging in recent years.

The growth of Liberte Kefir, a popular fermented milk drink, is a notable example.

Today, in Japan, Korea, USA and some other countries, fermented juice, snacks and beverages are widely accepted. According to statistics, 2 in 5 UK and US consumers have increased their consumption of “healthy foods”; 23 % of China consumers consider “made of real ingredients” to be the most important factor in the purchase of food & beverages. The fermentation process helps produce vitamin B and organic acids, and break down hydrolyzed protein into polypeptide, besides, it keeps the natural color of raw materials. Fermented meat is a case in point. As microorganisms dissolve the protein in ham in cold environment, fermented ham will give off mouthwatering flavor. Boasting such advantages, fermentation are applied and entrenched in some cultures, exemplified in Scandinavian buttermilk or sweet lassi and Dahi from India. 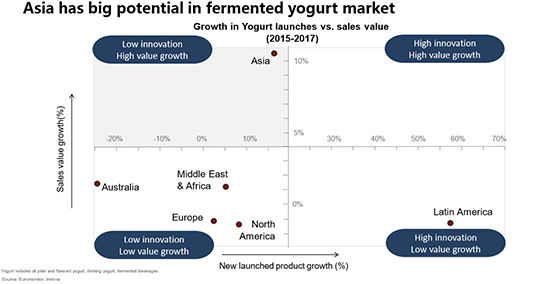 There are specific and individualized characteristics of the yogurt market in different regions in terms of product innovation and overall market value: Asia is a low innovation and high value growth market while Latin America is a high innovation and low value growth market. Therefore even though the popularity of fermented products (except conventional fermented dairy products) in China remains low, big players already appreciate the huge potential of the market and are racing for greater market share by launching innovative fermented products. Danone accounts for a quarter of the global yogurt market at present, which is the outcome of their dedication to innovation.

What are consumers expecting in new areas of fermentation? 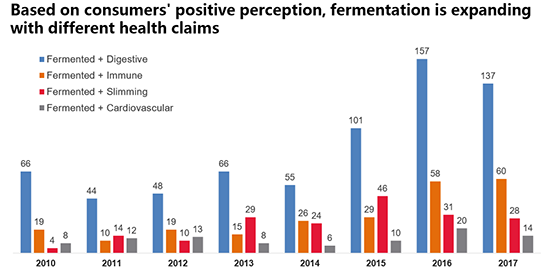 “Health” is the best short answer. Consumer perception of fermentation products are intrinsically linked to the inherent health benefits of fermented foods. The idea of “fermentation +” products which confer added physiological benefits is a newer concept which is gaining traction amongst consumers and is associated with the use of health claims — digestive, immune, slimming, cardiovascular functions and so forth. Seen from the chart, fermented products with digestive function are the most popular, followed by immunity enhancing products. People are increasingly asking for more new categories of fermented products, such as ones that can decrease internal heat, and ones that promote sleep.

Take for example the Kombucha in American market. Initially it’s brewing and consumption was a relatively esoteric practice and was primarily produced by small home based operations. Manufacturers soon realized the potential of the market and began mass production and marketing. Later more and more manufacturers added probiotics in Kombucha, making use of the health values of fermentation. The success of Kombucha sends out a message: combining fermented teas with juices, probiotics or other functional ingredients is an excellent strategy to meet evolving consumer preferences.

Snack foods are another high potential niche of the fermented food sector. Although snack foods are extremely popular they are increasingly the subject of scathing criticism due to their role in the global obesity epidemic and skyrocketing diabetes rates. If snacks are combined with fermentation which can infer some physiological benefits to consumers it offers hope of mitigating against some of the detrimental effects associated with snack consumption.

How can manufacturers meet the demand of consumers in China?

In China, conventional fermented products are already used in people’s life, but innovative combinations of fermentation and beverage or snacks have huge potential. When companies rest eyes on innovation, all aspects of market access — scientific marketing, right distributor, etc — are vital, and compliance with regulatory requirements is a most important step in beginning. For one thing, manufacturers exporting fermented dairy products to China have to get permission from CNCA; for another, fermentation fungi applied in the food manufacture process need be those in the list of approved fungi, otherwise will need registration before being put into production.